The Everlasting Urn® has created a range of indoor and outdoor memorial products that provide security, impenetrability and accessibility.

Our products are aesthetically pleasing, non-intrusive, and focus on retention primarily in your own home garden or memorial park of your choice.

The Journey home starts here …. with a Home Garden Memorial 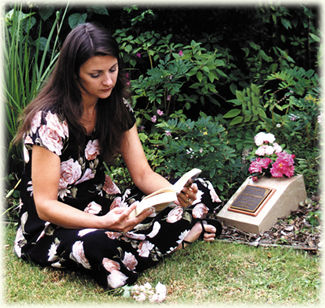 Everlasting Garden Treasures proudly offer you and yours The Everlasting Urn® & also have created a small range of outdoor memorial products for Cremated Remains – Cremains that provide security, impenetrability and accessibility all in a nice quiet corner of your own Home Garden.

These wonderfully simple products offer those left behind PEACEFUL QUIET TIME to REFLECT, are PRIVATE & offers you to have your dearly departed VERY NEAR-BY & not at some distant and in an unsightly brick columbarium wall in a memorial park – or needlessly rushing through a scattering process.

Having The Everlasting Urn® with your loved one at rest and back home in your own garden gives you TIME all at YOUR own individual pace to cry, scream, curse if you must, yet hopefully smile, laugh and recall.

There is just no-way up & over or under the “Grief Cycle“ after losing a loved one- WE ALL have to go through it. 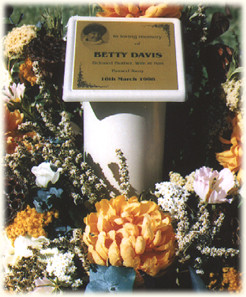 YOU are going to go through it like us all – that said, clearly The Everlasting Urn® is a clear winner and answer to assist people through their pain and loss in giving folks a focus point all in the comfort of their own sanctuary – most often in your own garden with the flowers, birds, sunlight, warmth and comfort.

When you are ready your loved one is nearby, just a few steps away where you can visit at your OWN pace, and reflect over a coffee or cup of tea, a beer, reading a book and just chilling out. You haven’t left your loved one in a brick wall, scattered too quickly or stuck them in the cupboard or boot of the car as many do while trying to find peace.

Regarding “ Traditional “ indoor Cremation Urn options that are mostly made of Clay, Brass, Bronze, Timber, Glass & even striking Chinese made Cloisonné are sometimes beautiful pieces of art – yet it is fact that having the ashes on the mantel piece or on show in the house in a “ Traditional Urn “ is somewhat alien to the average Aussie.

How many times we have heard “ its spooky “ counts in the hundreds and again folks just love the concept of where a nice little garden corner of their / your own back yard is the answer for so many literally in the thousands before you – Trust us YOU and YOURS are not alone.

Our products are proudly aesthetically pleasing, non-intrusive, & focus on retention primarily in your own home garden zone of your choice where all is tied to the earth and not stuck in a cold, distant ugly hole in the wall !

How did THE EVERLASTING URN® come about ?

As so often in life – … Necessity is the Mother of Invention !

Back in the early 90’ the inventor of The Everlasting Urn® lost his Wife & love of his life to poor health.

They had spent over 55 years together and he was completely lost and shattered.

The pain of the loss and grief was significant as it is for all of us when we lose someone close. His wife was cremated, as planned, and when he went to pick up the Cremains housed in the normal “ plastic lunch box “ with plug hole for scattering and all nicely wrapped in brown paper…  he was SHOCKED that it had all come to that !

The inventor went to the memorial park to see what options he had to have a memorial for his Wife for him to visit. He was aware of traditional urns and a retention-in-a-jar of sorts on the mantelpiece, but it just wasn’t for him.

The kind attendant at the Memorial Park offered a “ Hole in The Wall “ that costs thousands or buried among the Rose garden – a much better option – but again, he didn’t like the crazy costs, AND to be truthful, he wanted his Wife with him.

Effectively, the Memorial Park options and those offered via his Funeral Director were NOT for him !

He knew in his crushed heart that he wanted his wife with him, NOT scattered, NOT in some distant Memorial Park

Being a retired inventor and electrical-mechanical engineer, he decided to place pen to paper over the breakfast table. As he thought out and doodled many a drawing from his real need, The Everlasting Urn® was born.

As they say, “Necessity is The Mother of Invention“.

His original concept and basic invention was so unique that The Everlasting Urn ® was awarded Patents around the globe.

COMMERCIALIZATION of The EVERLASTING URN ®

The true commercial story goes back to the early 90’s. Many a Memorial Park across Australia didn’t care for The Everlasting Urn® so much, as while a brilliant and simple option, it frankly was a cash-flow KILLER !

Memorial Parks want to sell high cost to you – with high return to them memorial plots – Why would they offer willingly & help distribute a vessel that was very appealing to folks to buy and take their loved one out of the Crematorium or Memorial Park gates ?

The crazy thing is – that MOST cremated remains head out the gates anyway in the arms of loved ones left behind as the options offered were NOT for the immediate Family.

Back in June 1994 The Everlasting Urn® landed on display at the Annual Convention of– The Cremation Association of North America ( C.A.N.A ) where hundreds and hundreds of Independent Funeral Directors and Managers, Owners, Directors & CEO’s of International Funeral Home & Memorial Park Conglomerates visited the stand where at times 5-6 wide and 3-4 deep to see and listen for themselves.

It was as if a couple of “ Aussie Aliens“ had landed their Flying Saucer at the Disney Land Hotel in Anaheim California and popped up a display table at the C.A.N.A Convention to show off their out of this world concept to hold Cremains before the massive and growing Cremation Market place right across The United States and Canada.

Some U.S.A States were growing rapidly in offering Cremation as an end-of-life option, like California, Arizona, Florida etc. and was well underway in Canada.

Strangely, many a traditional Independent Funeral Director were / are against Cremation Services as an offering but they were acting like Dinosaurs and left behind – it was game on, and many have had to change to meet the market.

The US back then was a difficult market to pry open, and some setbacks to do with Patent Infringement took hold where the world’s largest Funeral Service Operator at the time turning over near USD $4 Billion a Year decided upon themselves to take what they learnt from Australia.

That’s right, they took the concept of The Everlasting Urn® and began to implement versions of the theme into their Memorial Parks at some $10K option in Hollywood- a total rip-off.

It was a fight for sure & a real setback in both time and money, The Everlasting Urn® suffered a real set back – but that’s OK – in Life Karma has a hold, much has been learnt and a drive for & into the U.S market still simmers.

Yepp, perhaps one day – we may yet stir it all up in the American market place again, – as average consumer folks and progressive Funeral Directors & Cremation Service providers truly just loved The Everlasting Urn® as a wonderful, cost effective option, not for all, but for many.

Cremation Societies and the like offering Direct Cremation Services – even direct to the consumer would be and is ideal.

Nothing like a good industry disruptor to assist those being taken for granted and ripped-off !

So after several costly and personal setbacks- we as a Team have never given up wanting to continue to manufacture and offer a wonderfully simple option for the retention of Cremated Remains – where us humble and real folk can hold close our loved ones with us, nearby, all in a nice little flower pot or flowering, shaded garden etc.

With The Everlasting Urn® being easily transferable & movable between homes, gardens and / or when ready easily scattered from if and when that may be the time and desire after helping you and yours through you grief cycle and years gone by.

As an option and a further step, in time & if desired, the entire Urn could be scattered from – or as the complete sealed Everlasting Urn with cremains within weighs quite a bit – not unlike a few bricks.

Weighing in at 5-6 Kilo, you can let it go overboard complete into the ocean, river or like where marine animals would love to use it as a home of sorts.

How about many small colourful fish, and small Crustaceans, Shell Fish, even little Octopus etc. all living under and around the Urn, … simply put, your loved one giving back to life ! VERY COOL !

Another great option might be to bury the urn complete or scatter the contents in time around the base of or into the hole dug when planting a new Tree. Again, all done in due course after you have had time to sort all out and are now at rest and peace of mind has taken place.

Just a gentle reminder, if we may advise and share with care & due respect. You see, we have spoken to many, many hundreds of folks who thought that a quick scattering after Cremation is / was the only answer- and where they just wished desperately that they knew BEFORE that irreversible act & knew about The Everlasting Urn® as a process & peaceful option offering peace, empathy and comfort.

In closing, you see scattering is a wonderful option in our world also, BUT – please understand before & remember it’s irreversible, complete & FINAL– and this is where The Everlasting Urn® again is an option and some insurance for your grief processing.

Thank you for reading a little back-ground regarding The Everlasting Urn® and its history in recent past.

We sincerely look forward to discussing your needs and being of service in the not too distant future.